This past week, after arriving back home from my trip to Visby, I had a quick 12 hours to sleep, pack and head back to central station with my forensic psychology course to spend a week in Gothenburg (Sweden’s second largest city). During what DIS calls “Core Course Week,” each core course spends a few days in a city in Sweden chosen by the professor to dive into the topic of study. Since my professor lives in Gothenburg, we went there to explore some organizations she has already made connections with. One of the reasons I chose DIS was because of the emphasis it has on experiential learning, and this past week did not disappoint on that front.

Our field studies this week included visiting a halfway house for prisoners about to end their sentences, a woman’s domestic violence shelter, a research institute called CLIP (Criminal, Legal and Investigative Psychology), and a forensic psychiatric ward for those diagnosed as criminally insane back in Stockholm.

While all were very interesting to learn about, the one that I was most surprised by was the halfway house. Immediately after arriving in Gothenburg early Monday morning, we were given time for lunch and then told to meet at the halfway house to listen to one of the employees speak. None of us were very in the mood for a lecture (we had taken the 6am train that morning from Stockholm) but our hosts greeted us with cookies, tea, and coffee.

Upon entering I could tell right away how drastically different this place would be from my expectations. In the United States, we treat prisoners with very little respect and do not have many organizations aimed solely at promoting reintegration in society after the end of a sentence. I don’t know of any halfway houses in the U.S., but I was expecting this one to be something resembling a prison. This halfway house was arguably nicer than my dorm at school, and had an extremely welcoming feel. My favorite quote from the woman who talked to us was, “Here, you’re more than a number. You’re a name.” It’s been really amazing (but also disheartening) to learn about the ways Sweden is more advanced than the U.S. in dealing with issues like incarceration. I really hope the U.S. can one day get to a point where we view prisoners as humans still, and focus more on rehabilitation than punishment.

Aside from field visits, my class was able to bond a lot this past week in Gothenburg. We ate most of our meals together, and I felt that we all really connected, so I’m very excited to start having normal class again. My favorite part of the trip was the last day when my class went to an escape room called “Prison Island.” I’ve only been to one escape room before in the United States, but this one seemed unique in that we were divided in to teams and had to choose different rooms or “cells” to go in to beat the challenges inside. Each cell was different and they ranged in difficulty, with the harder ones being worth more points.

One of the cells 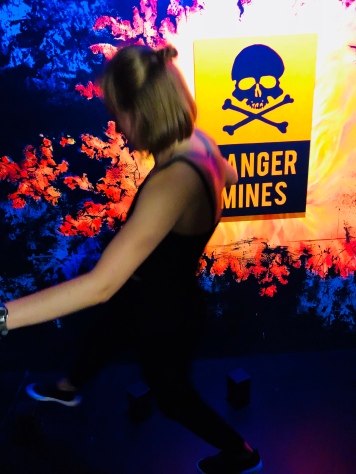 I was on a team with two other girls in my class, Irene and Maya, and our professor, so I thought we would have a very easy time winning (given she’s a forensic psychologist). However, much to our confusion, our professor spent most of the time standing off to the side and contributing very little. She later admitted she knew almost all of the answers to every room, and didn’t feel it was fair for her to help (my team still won without her help)! 🙂

My team: me, my professor, Irene, and Maya

We finished the week in Stockholm, visiting our last organization closer to home (the forensic psychiatry institute). We were lucky enough to get done with everything on Thursday, so we were given the day off on Friday. A few of us decided to go to the famous amusement park downtown (Gröna Lund), since it closes for the season soon. I couldn’t have asked for a better end to the week, even though I almost peed my pants on one of the rides (some of them are a lot more intense than they look – Sweden really knows how to build rides).

It’s hard to believe that as of today, I’ve been in Stockholm for four weeks. My time here is going much faster than I would like, but I’m so excited for more adventures like this past week to come.